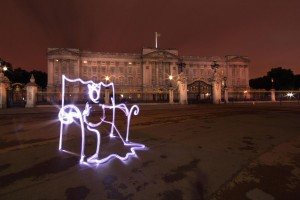 A Caerphilly photographer who specialises in ‘light graffiti’ is the brains behind a new national TV advertising campaign.

Some of Britain’s most famous landmarks feature in the work of 39-year-old Michael Bosanko for the Talk Talk campaign.

Michael uses long exposure shots and different coloured torches to draw with light to create the stunning pictures – all without digital photography software such as Photoshop.

All the pictures were taken in just one weekend and feature London, Birmingham, Sheffield, Newcastle and Edinburgh.

Michael said: “It’s been an incredible weekend racing across the UK, working through the night and trying to stay ahead of the sunrise.

“It has to be really dark to take the pictures, in order to give me as much time as possible to create each image. Street lights are big headache as the shot immediately begins to brighten up when the lens is open so I have to work really fast.”

Watch how the pictures were made above