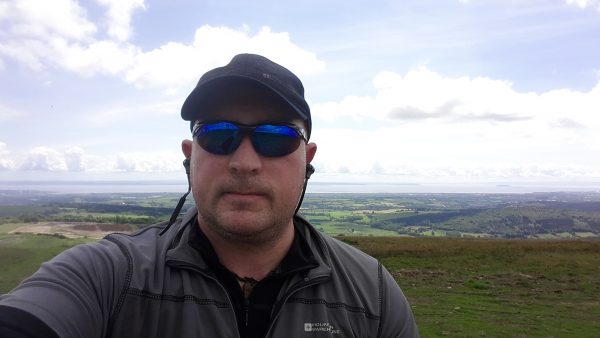 A Caerphilly man who lost his sight in one eye due to Multiple Sclerosis (MS) is doing a sponsored walk for charity.

Guy Cooper, 43, will be walking 14.5 miles through the countryside and hilltops of the Caerphilly basin on Saturday, March 16.

Mr Cooper is aiming to raise £800 for charity MS-UK, who have named him fundraiser of the month for March.

Mr Cooper will start his walk at St Barrwg’s Church in Bedwas, before heading to the top of Mynydd-y-Grug, near Cwmfelinfach.

From there, he will head towards the Sirhowy Valley Country Path to the Machen Mast and then into lower Machen.

Mr Cooper will then make his way to Ruperra Castle and the Maenllywd Inn in Rudry.

He will then walk along the Ridgeway path towards Caerphilly mountain, where he will finish the challenge.

Mr Cooper lost the vision in his left eye and after having an MRI scan, he was told by neurologists he had MS.

He told Caerphilly Observer: “When I was first diagnosed, I wanted to fight back as best as I could.

“As ridiculous as it sounds, I’ve lived in Caerphilly since the 1980s and had never known what was on the other side of Bedwas mountain, so I began walking on the mountains where I used to play when I was a child.”

Mr Cooper added: “After a relapse last year, I lost confidence in myself.

“I wanted to push back against MS and came up with the idea of doing my most ambitious hike yet.”

During the walk on March 16, Mr Cooper will be joined by work colleagues Tim Meddick and Stina Watkins, who is a former nurse and will be on hand to provide first aid if needed.

MS-UK community fundraiser Lucy King said: “We are so grateful that Guy has chosen to support MS-UK with his very special challenge. It has been amazing to be able to follow his training towards the big event and we are very proud of what he has achieved so far.

“The money he raises will go towards maintaining the invaluable services we offer the MS community.”