Controversial plans to build 350 homes on a former golf club in Caerphilly town has been recommended for approval by planning chiefs.

A community centre, playing fields and children’s play areas are also contained in the outline planning application due to go before Caerphilly council’s planning committee on March 20.

But the developer has removed a requirement for 40 per cent affordable housing, saying it would make the scheme unviable. Only 14% – 49 homes – will be offered at discounted market rates.

Response to the scheme has also been mixed, with the six letters written in support of the application dwarfed by 249 objection letters and a petition signed by 38 people.

Cllr Jamie Pritchard said: “Its outrageous the developer has reneged on a commitment to provide up to 40% affordable housing on the site by reducing that figure all the way to zero.

“This is a scandal that will be forcefully challenged at next week’s meeting of the Planning Committee.”

Virginia Park Residents Group chairman Steve Mears told Caerphilly Observer: “We understand that there is a shortage of affordable homes in Caerphilly but this development on the old golf course is built on top of an old dump and the ground survey shows hydrocarbons and heavy metals, as well as asbestos and wires etc would be released into the environment.

“Plus the proposed entrance way will add to even more traffic congestion in the surrounding areas . Add to to that the local schools are full, the doctors surgeries are full and the dentist is full. So we feel this development is in the wrong area.”

The clubhouse, and surrounding ponds, would be retained with the building serving as a local centre and complimented by a sports pitch.

A new road would be built from a junction off Heol Bro Wen along with several footpaths and cycle paths at Sir Stafford Close, Hazel Grove, Meadowland Close and Caerbragdy.

GHR say the site will carry “significant” benefits to Caerphilly with its good links to the town centre and the nearby leisure centre and rugby club, as well as offering ‘distinctive’ views of Caerphilly Castle.

“The proposals will deliver much-needed new homes through the development of vacant underutilised land in a sustainable location,” adds a planning report.

But there are local concerns about the number of houses being proposed or developed in the Caerphilly Basin area.

Officers say the authority is “under pressure” to consider applications in the south of the borough as the north is not “viable or attractive” to developers or homebuyers.

Objectors also say the application does not go far enough to retain public open space, and that more consideration should be given to the views in and out of the site and its relationship with Caerphilly Castle.

Other issues raised include flooding risk, an increase in traffic causing further pollution, and potential strain on schools, dental and health services.

The application has been recommended for approval subject to section 106, or community funding, being agreed between the council and GHR. 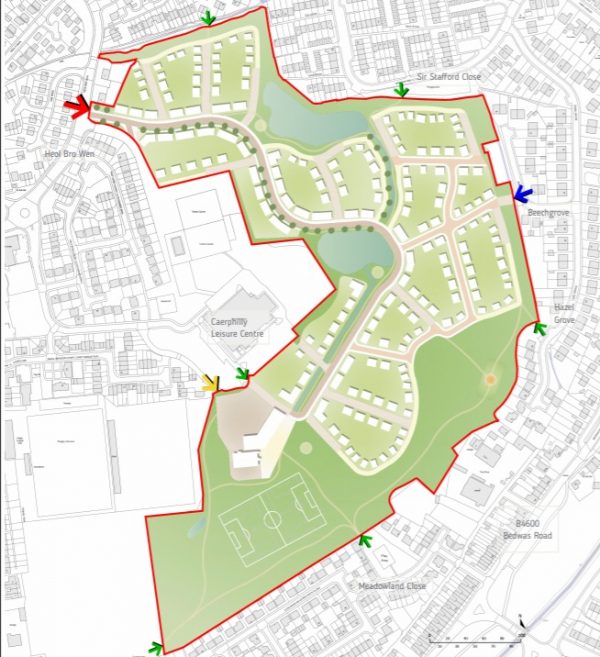