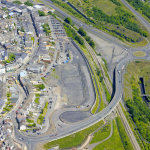 Caerphilly County Borough Council has assured traders in Bargoed it is still working to try and get a major regeneration scheme off the ground – despite being turned down for Welsh Assembly cash.

The council had submitted a bid to the Welsh Assembly Government for funding through the Strategic Capital Investment Fund (SCIF) but the bid was turned last week.

The council is working with developer Simons to get a major supermarket on board that will help regenerate the town centre.

Councillor Ron Davies, cabinet member for regeneration, said: “Traders in Bargoed can be assured that we are working hard to drive this ambitious scheme forward. We recognise that this development is key to Bargoed’s future success and we are hopeful that we can secure a major name in the near future.”

Chris Newsome, a director with Simons Developments said: “Despite the recession Simons is delivering on town centre developments, such as Carmarthen, where construction is well under way.

“The credit crunch has created problems for all town centre developments, however, the financial climate does appear to be improving and there is still strong interest from several foodstore operators in Bargoed. ”

The company will present its proposals for moving the development forward to the council and Welsh Assembly Government before the end of the year.

Meanwhile the former Woolworths store in the town could be transformed into new office space.

Cllr Davies said: “The demise of Woolworths left a big hole in many High Streets so it’s very encouraging to see that a new use has been agreed for this site in Bargoed.

“The scheme forms part of our plans to create a ‘business quarter’ in the town and the news comes at a time when a range of other exciting regeneration projects are all helping to transform Bargoed’s future.

“Schemes such as the recently completed Angel Way road, along with the improved public transport facilities, are helping to position the town centre as an attractive proposition for anyone looking to set up a new business and this new office development will also bring new employment opportunities to the town.”

The council is set to take ownership of the building after money was secured from the Assembly through its Heads of the Valley Programme.

The council is now bidding for European Union money to convert the building into offices.