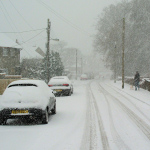 There is only 200 tonnes of grit salt left in Caerphilly County Borough – a level which the council describes as “critical”.

The news will mean further chaos and disruption on valley roads as the cold weather continues and the council, like many others in the UK, struggles to order more.

Caerphilly County Borough Council has taken the drastic decision not to refill any street grit bins to preserve what little grit it does have, meaning thousands of residents will not be able to clear their own roads.

A council spokesman said: “One decision that we have reluctantly taken is that grit bins will not be refilled while our supplies are at such a low level.

“We have over 700 bins and it would take almost 200t to refill them all. We will continue to review the situation and we will obviously ensure they are refilled as soon as our salt supplies are replenished.

“Another issue that is having a major impact on the community is the closure of schools.

“Headteachers obviously have a duty of care towards their pupils and staff, therefore they have the discretion to close their school if they believe that opening the site would present an unnecessary risk.

“Highways Operations have committed to clearing lying snow from school entrances and where possible school car parks over the weekend. Priority will be given to those schools where students are sitting exams at the beginning of next week.”

So bad are the roads across the county borough, the council has had to continue its meals on wheels service by using 4x4s from its countryside and landscape department.

Using the vehicles the council has managed to deliver more than 2,500 meals across the borough this week.

The Met Office has forecast more persistent and possibly heavy snow over the weekend.