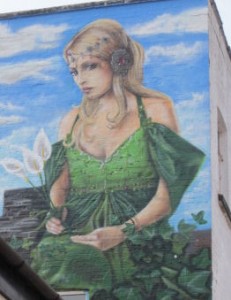 An 80ft mural of Caerphilly Castle’s infamous resident The Green Lady has been unveiled in Caerphilly.

Residents and traders came together to help unveil the mural on Pentrebane Street, Caerphilly.

He said: “This fantastic piece of artwork is another step towards rejuvenating this part of our town.

“This wonderful mural depicts Caerphilly Castle’s legendary resident, ‘The Green Lady’, and I’m hopeful it will delight passers by and visitors to Pentrebane Street’s businesses alike.”

Julie Boyce, owner of the ‘Shake it Up’ cafe, said: “This mural is a splendid addition to Pentrebane Street and has helped brighten up a previously rundown part of the street, and put smiles on the faces of the townspeople”.

The mural, by Malarky Arts, was part of a Welsh Assembly initiative.