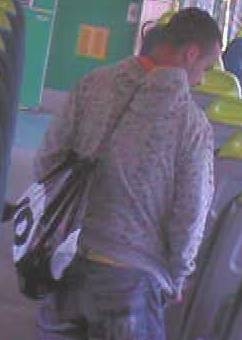 British Transport Police are appealing for help to identify a man they would like to speak to in connection with the theft of a woman’s handbag in Cardiff Queen Street train station.

The woman, who boarded the 12.05pm train to Bargoed on Wednesday July 15, accidentally left her bag on platform 2.

The handbag was later found in the men’s toilets at Cardiff Queen Street station. A mobile telephone and a quantity of cash belonging to the woman were missing.

Police have issued these images of a man they are keen to speak to who was seen sitting on the same bench as the woman before she boarded her train.

The man, who caught the 12.10pm service to Treherbert, is described as being of mixed race, in his late teens or early 20s, about 5ft 10in and of medium build.

He had a black moustache, short black hair and was wearing a light grey coloured hooded speckled top with an orange lining, blue jeans, a yellow belt and dark coloured trainers.

The man was also carrying a black JJB sports shop carrier bag with a string handle across his shoulder.