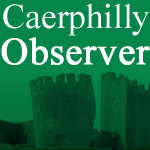 Caerphilly Observer is proud to announce it is launching a printed edition next month.

Originally launched in July 2009 by journalist Richard Gurner, Caerphilly Observer will be expanding into a fortnightly, full-colour, 16-page tabloid newspaper.

Richard is making the move into newsprint thanks to a European Union-funded business grant from Caerphilly County Borough Council.

He said: “When I returned to Caerphilly in 2011 to work on the site, after setting it up while I was living in Brighton, I said it had long been a dream of mine to own my own newspaper.

“That dream will be fully realised next month when we launch our first edition. Publishing a fortnightly newspaper will be hard work, but I am convinced it is the right move.

“The response to the website we’ve had from readers and businesses alike has been overwhelmingly positive, but the the question they keep asking us is when are we going into print? We decided to satisfy that demand and I’m thrilled to be fulfilling a life-long dream.”

Since its launch in 2009, Caerphilly Observer has already overtaken the website traffic of local newspaper Campaign, where Richard began his career nine years ago. The website attracts an average of 50,000 page views and 20,000 unique visitors a month.

The print edition of Caerphilly Observer will have a circulation of 10,000 copies and will be the only free newspaper to cover the whole of Caerphilly County Borough. It will be distributed in shops and newsagents for readers to pick up.

Richard added: “Caerphilly County Borough doesn’t have a newspaper dedicated exclusively to the entire area and it is this gap in the market that we will be addressing.

“The goal for Caerphilly Observer is to create a sustainable, locally-owned media that our readers can be proud of.

“Despite huge traffic numbers that we can be proud of, there are still large parts of our community unfamiliar with Caerphilly Observer. A print edition will expand our audience and grow our brand to reach people not already online.”

If you are interested in advertising with Caerphilly Observer please contact Jan Withers on
07857 528627 or email jan@caerphilly.observer